The province was blanketed with snow, reaching up to 20 centimetres in some parts, with high winds making it near-impossible for commuters to see where they were driving, and causing them to be even worse drivers than usual.

Perhaps the biggest derailment from this storm was the wrench it threw into the plans of Premier Gallant, whose day planner was packed with events, some social and others business-related.

“I had a full day ahead of me,” complained the premier. “I had tickets to go see Snow White at the Playhouse, just in case they needed a fill-in for the prince or whatever. Then I was hoping to return a bunch of my Christmas presents — Horsman got me gift cards for tanning. It’s like he doesn’t even know me; I have my own tanning bed at home. And then I had this speech about something for some charity thing that my publicist said I’d do.”

The Manatee asked Gallant whether it was the risky road conditions that caused him to cancel his Sunday plans. “No, not at all. My drivers will take me anywhere I want,” he explained. “That snow and ice is just miserable for my hair, though. All that moisture and wind, it’s like the perfect storm for bad hair conditions.”

Gallant went on to explain why he felt it was imperative to skip his scheduled events rather than show up with his hair not looking exactly the way he likes it.

“Could you imagine if I showed up to Snow White with messy hair?” he asked our reporter. “They’d probably mistake me for one of those ugly little dwarfs. And no way can I be seen in public all messed up. The people have a certain expectation of what their leader should be: handsome. I think that’s a major reason why Alward lost — he’s really let himself go.”

The Liberal leader couldn’t comment on when New Brunswick residents would see their power restored or their roads cleared, but he did leave our reporter with one promise. “I’ve got a team of people researching different types of gels and sprays, so I make this promise to the people of this great province: I will do whatever I can, exhaust every resource at my disposal, to ensure this never, ever happens again — I will have the hair that the people deserve to see me have.” 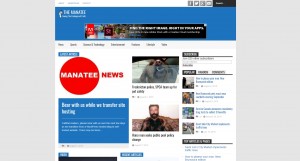 So maybe we should drive 15 km over the limit and tailgate . How about giving a few more minutes to get to work idiots.

Minnesota is a GREAT state and has no intention of leaving this flaming clown car flying down a crowded street without brakes of a fucking country. ...

Probably actually true. I don't know. Not like I can read the Telegraph Journal without forking over $30 a month to find out.